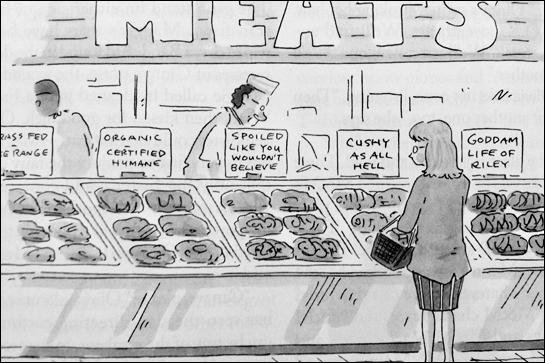 Recently the Museum of Food and Drink (MOFAD) hosted a Roundtable on the Future of Meat. Panelists included Peter Singer, ethicist from Princeton; Patrick Martins, founder of Heritage Foods; Isha Datar, Executive Director of New Harvest, a non-profit focused on rendering animal agriculture obsolete through tech innovation, and Mark Budolfson, postdoctoral fellow at Princeton focusing on ethics and public policy. You can listen to a recording of the session here.

The panel was well-timed as meat consumption and sustainability continue to be important topics in food system discussions with meat consumption, the inhumane factory farming that supplies most meat, and the environmental consequences of such consumption growing at alarming rates. Livestock production accounts for 18% of greenhouse gas (GHG) emissions, and meat consumption is expected to double by 2020.

Singer described his perspective on eliminating meat consumption, as even what is marketed as better options such as grass-fed beef generates more GHGs than the grain-fed alternative. Martins shared his belief that meat can be eaten less but the focus should ultimately be on the quality. Datar expects a portfolio of meat alternatives to be developed in the lab and emerge as the most sustainable, and in time, affordable, options. One such example that can already be found nationally is BeyondMeat’s unchicken, featured in salads and sandwiches at fresh&co.

The event closed with the audience sharing a diversity of perspectives, some questioning why we should reduce meat consumption at all and others who protested in favor of life, claiming that animals should be respected and not eaten at all.

Marion Nestle recently commented that issues related to the long-term health effects of red meat, saturated fat, sugar, and grains are complex and I see the jury as still out on many of them.

We think this is the time to discuss sustainable diets. As part of our recent Commission Recommendations, the Vitality Institute supports cross-sector collaborations that generate health improvements in society. Improving sustainable food consumption requires working across sectors to achieve healthy, sustainable diets that minimally impact the environment. Success has been shown with Vitalitys HealthyFood program improving diets while positively impacting the environment.

Our Executive Director, Derek Yach, will be speaking later today about the need to align agriculture and nutrition goals at the upcoming James Beard Foundation Food Conference (which will be livestreamed). Tune in at 3pm Eastern Time to hear more!

Source of image: The New Yorker (click to enlarge)