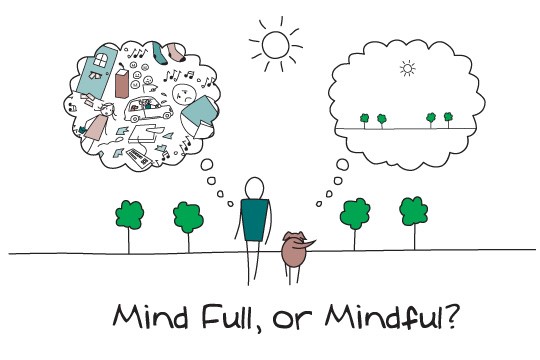 Christopher Moore, a researcher specializing in the effects of meditation on the brain, and David Gelles, author of Mindful at Work, offered thought-provoking ideas as part of the Rubin Museums Brainwave Series 2015, exploring the Buddhist notion of attachment.

Excessive stress, depression, and substance abuse drive over $80-100 billion indirect annual healthcare costs for employers on average. In 2006, 36.2 million Americans paid for mental health services, totaling $57.5 billion in healthcare expenditures. However, while an estimated 16 million adults in the US had at least one major depressive episode in the past 12 months, only about 40% of adults received mental health services in 2012. On a global scale, mental illness affects a quarter of the worlds population and accounts for 13% of the global burden of disease; 70% of that burden is held by low- and middle-income countries.

In this context, employers are turning to mindfulness and meditation to decrease stress, build resilience, and foster a more productive, happier workplace. Originally a Buddhist tradition, mindfulness has gained considerable traction in the Western world. Fundamental to mindfulness is the notion of being present: observing, rather than avoiding, ones emotions and thoughts, including fear and anger, without judgment. It includes cultivating the ability to pause in the midst of difficult moments.

A growing body of evidence weighs whether mindfulness produces the effects responsible for its growing popularity. Researchers including Moore explore how mindfulness alters alpha waves in the brain, whose slowing down may help filter and organize sensory inputs, enabling practitioners to improve their focus. Researchers from Johns Hopkins University analyzed 19,000 studies and found that mindfulness programs showed moderate evidence of improved anxiety, depression, and pain. Other studies found that compared to treatment as usual, mindfulness-based stress reduction therapy improves mental health and can prevent depressive relapse.

In hopes of boosting focus, productivity, teamwork, and employee health and well-being, increasing numbers of employers offer some form of mindfulness training. Mindfulness is not only popular with companies in Silicon Valley like Twitter, Facebook and Google, but has also gone to scale in companies like Aetna, General Mills, Goldman Sachs, Blackrock, McKinsey & Company, Adobe Systems, and Bank of America.

At Aetna, more than 13,000 workers participated in free yoga and meditation classes, and the company reported an average of 28 percent reduction in stress levels, 20 percent improvement in sleep quality and a 19 percent reduction in pain. They each gained 62 productive minutes per week, worth $3,000 per employee per year for Aetna. Despite its successes, Aetna has not yet offered the same program for its members.

Similarly, a study examining the impact of an online mindfulness course on Dow Chemical Company employees found that participants showed significant decreases in perceived stress as well as increased resiliency and vigor.

Both Moore and Gelles advocate for mindfulness at work, and how the practice can change business for the better. That said, while mindfulness is a promising tool for employers improve employee well-being and bolster the effects of evidence-based health interventions, companies should consider how the practice would fit with existing culture.

With about 50 available mobile apps on mindfulness and around 18 million Americans practicing meditation, how does enthusiasm for the practice and its application compare in its birthplace of East Asia? Hong Kongs recent Mental Health Morbidity Survey found that one in six people suffer from anxiety and depression, and only 25% of suicide victims ever sought professional support. While meditation blossoms in the US, it seems people in Hong Kong are also turning to social media as an opportunity to strengthen the safety net and destigmatize mental illness for young people. This reinforces the need for a holistic approach to health and well-being, using all the tools available to build a culture of health.

Do you practice mindfulness, or do you know someone who does? What do you think about mindful practices in the workplace? Have other tools helped you get through a stressful time? Let us know in the comments below or on Twitter by tagging @VitalityInst.

How Vitality is Giving Back this Giving Tuesday
Food: the first line of defense in your health
Family Health History: A Perfect Gift For Your Loved Ones This Thanksgiving
Get the facts