Longevity in the Workplace: 60 is the New 40

The ageing of the worlds population has significant implications for the workplace. For the first time in history, there will soon be more people over age 60 than under age 15 in the world. This means that existing attitudes surrounding our global workforce and efforts to attract and retain elder employees must change. Additionally, corporations, governments, researchers, and other sectors must further realize the essentiality of this group, which controls a large majority of disposable income in many nations such as the United States, which will have about 70% of its disposable income controlled by seniors in 2017.

Another key factor in developing age-friendly businesses is having age-friendly cities in which employees live. The World Health Organization (WHO) expects the share of older people to multiply to over 908 million in 2050; organizations such as WHO and AARP have developed tools and guidelines to encourage the development of initiatives to allow seniors to work and age in place.

The World Economic Forums Global Agenda Council on Ageing (WEF) is especially concerned with issues related to the greying of the worlds population. In 2012, it released Global Population Ageing:  Peril or Promise, a seminal work on the revolutionary consequences of worldwide population ageing and what it means for social and economic life as well as behavioral norms, social expectations and institutional policies. In 2014, WEF published a white paper highlighting the power of the elder economy, How 21st Century Longevity Can Create Markets and Drive Economic Growth. The paper lists principles businesses can adopt to support and realize the potential of senior employees (See text box).

This year, utilizing a broad base of members across industries and ages, WEF conducted a global survey to better understand todays perceptions of longevity in the workforce as well as if and how environments are adapting to accommodate this workforce with distinct needs.

Here is what the survey of 150 respondents found:

23% believe employees hit their peak potential between 55 and 64

When asked at what age employees achieve their peak potential, 23% of the respondents replied 55-64. About 58% of respondents also agreed that retaining older workers was currently a competitive advantage at their company. Given this, we might expect to see interesting movement in workplace environments and outreach.

If this is the case, what are we doing about it?

The good news is that more than 68% of respondents say that their companies are open to accommodating employees who want to work beyond a traditional retirement age. 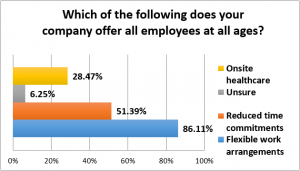 Furthermore, companies are addressing issues of financial planning and lifelong learning with employees  51% and 63% respectively. Health and well-being support for the ageing process is not as prevalent a conversation  only 44% said this was a discussion with employees. One respondent remarked that programming is available but that the participation was extremely low.

Finally, a resounding 77% of the respondents believe that increasing the retirement age globally will encourage workers to be in the workforce longer. This issue, while worthy of discussion, is already the source of significant political debate around the globe.

Considering the results of this research, companies are clearly aware of the important resource the ageing population represents and the need to embrace longevity in the workforce. At the same time, opportunity abounds to create innovative ways to take fuller advantage of age-friendly business principles to guide workplace and workforce alignment.