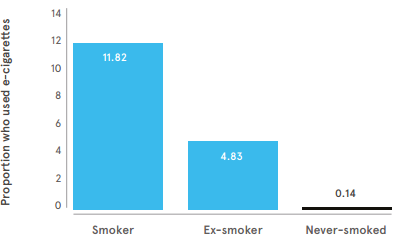 The UKs Behavioral Insight Team (BIT), better known to the public as the Nudge Unit, recently released a Behavioral Insights Report with health and well-being as one of ten areas of focus. The topics they cover range from organ donation  where their work shows how a simple change in messaging can add 100,000 people to the organ donor register  to smoking and e-cigarettes.

Recognizing the harm-reduction potential of e-cigarettes, the Nudge team builds on a core insight of behavior change, that it is much easier to substitute a similar behavior than to eliminate an entrenched one. Case in point: in terms of tobacco use, research demonstrates that almost all users of e-cigs are former smokers.

While a regulatory framework is necessary, there is growing evidence showing that e-cigs are more successful than Nicotine Replacement Therapy (NRT) at helping people to quit smoking. Behavioral economics and health expert Kevin Volpp from the University of Pennsylvania is conducting one such study with Vitality, and expects initial results by Spring 2016.

This insight around substitution is not only relevant to reducing risk from tobacco use. It has widespread applications including to the food and beverage sector, where efforts are underway to make products healthier by reducing salt, sugar, and even alcohol content in beer.

A number of companies have been working on these challenges for years. PepsiCo has been researching ways to reduce salt, from designer salt to other alternatives that can help maintain taste while making food such as potato chips healthier; and Unilever has been focusing on reducing sugar in beverages and ice creams, using low calorie sweeteners or natural alternatives such as Stevia.

In the UK, leading wine and beer companies are working under the Responsibility Deal to reduce alcohol content of their products, with the objective of cutting a billion units of alcohol. Estimates suggest that achieving this in a decade could result in almost 1,000 fewer alcohol related deaths per year as well as thousands of fewer hospital admissions and alcohol related crimes.

It turns out this substitution concept is not new. In 1924, America followed Switzerlands example and started adding iodine to salt to reduce the cases of an enlarged thyroid gland, known as goiter.

Today, the public health challenges we face are obesity, hypertension, and tobacco use, to name a few. The good news? We can use behavioral economics and the tested and tried method of substitution to help population health improve.

What do you think the greatest challenges associated to substitution are? Do you know of other successful examples of substitution being implemented? Let us know in the comment section below or by tweeting at @VitalityInst.