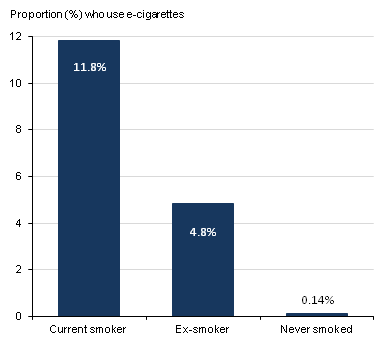 With the popularity of e-cigs rapidly increasing to a $5 billion annual global market  including a $2.5 billion market in the US  much discussion and controversy surrounds the products. A critical public health question exists: do e-cigarettes support tobacco cessation? Research is underway to answer this question, and a recent study found that intensive e-cig users were six times more likely to quit smoking than non-users or those who just tried e-cigs. However, many myths exist:

Myth 1: Nicotine is the dangerous substance in cigarettes

Of the 7,000 chemicals present in tobacco smoke at least 250 are known to be harmful and at least 69 carcinogens, or chemicals that can cause cancer. Nicotine, however, is not a cause of cancer or other serious diseases associated with smoking, but it is the main reason people smoke. Nicotine is the addictive substance in tobacco, and it has significant positive effects on motor abilities, attention and memory. Nicotine does pose several minor risks, but the people smoke for the nicotine, and die from the smoke.

It is the inhaled products of combustion of a lighted cigarette  the smoke which causes disease and death, and not the nicotine. Dr. Elizabeth Whelan, President of the American Council on Science and Health

E-cigarettes are almost only used by smokers and ex-smokers. Only 0.14%, or 14 of every 10,000 people who have never smoked, smoke e-cigs, according to data from Great Britain. It possible that even these users would have smoked cigarettes had there been no e-cigarettes.

While some people assert that the fruit flavored e-cigarettes are targeted to appeal to children, in fact research has shown that flavors are critical to supporting adult tobacco users to quit and do not have additional appeal to youth. Further research is critical to validate these findings, but smokers often start with a tobacco flavor (e.g. classic tobacco or menthol) and move to a non-tobacco flavor (e.g. vanilla or pomegranate), which helps keep them tobacco free. In addition, sweet and fruit flavors may help prevent sweet cravings leading to excess calorie consumption and weight gain, common when quitting smoking.

Myth 4: E-cigs are a gateway to tobacco smoking

E-cigs have been called a gateway to tobacco smoking. The gateway hypothesis predicts that those who use soft products like e-cigs may go on to use hard products like traditional tobacco. However, no research to date has shown that e-cigs are a gateway to tobacco cigarettes or any other product. In almost all cases, observed data is more consistent with people using e-cigarettes to stop smoking or to cut down.

Rather than banning marketing for e-cigarettes (which is not done for tobacco  they are one of the most heavily marketed products in the US), smart regulation can spur innovation to support e-cigs as a key tool to reduce the use of traditional tobacco cigarettes. While advertising must be regulated to prevent marketing to children, marketing will be essential to target smokers and reduce tobacco harm. Some may argue that advertising drives product use, although looking at the figure on cigarette and marijuana use by 12th graders challenges that argument as marijuana is not advertised. In fact, marijuana use tracks closely to cigarette use and recently surpassed tobacco use. 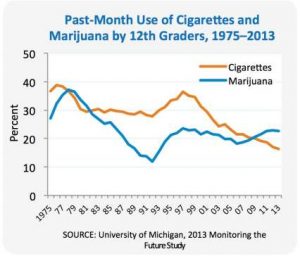 At the Vitality Institute, we believe in evidence-based decision making. So far, research shows that e-cigs have a high potential to reduce harm compared to tobacco cigarettes, but more studies are needed to understand if e-cigs do in fact support tobacco cessation. Our Executive Director, Derek Yach, has recently authored the cover story for the Spectator magazine on the potential for e-cigarettes to save lives. Read it here and share your comments with us.

We encourage you to follow us at @VitalityInst to learn more about the potential of e-cigs as research is undertaken and results are released.